Spare the rod and spoil the logic

I recently saw a blog post about using corporal punishment with children. All the studies I have seen reference in blogs seem to show a negative correlation between spanking and general well being. 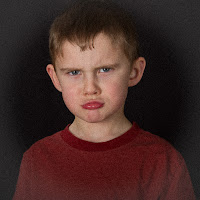 In the comments section that followed the post a lot of people disputed those findings. Every one of those commentators turned out fine because they had been spanked as children. They weren't spanked excesively, just enough to teach them a lesson. I am sure the studies showing all the benefits of spanking are being supressed by the liberal bleeding heart inteligencia.

The other thing that became apparent is how recent a development personal and societal problems really are. Before, when spanking was widespread, everyone grew up respecting everyone around them. There seemed to have been no problems with violence, crime or mental illness. Of course now that some parents don't spank their children problems with violence, crime and mental illness are rampant. The guilt I feel for having caused these problems runs very deep although I am not sure how not spanking my son, TroubleMaker, relates to spousal abuse, theft, murder, war, and depression on a global scale.

The fact that everyone who has ever been spanked has turned out okay really shows how wrong it is not to use violence when training children. And the ability to realize that once corporal punishment is no longer used all forms of discipline become meaningless really showed how well versed the pro-spanking group is on the subject of human development.

I had never previously understood the relationship between fear and respect. It seems that without fear there can be no respect. Communication, love and even respect itself are simply tools used by bleeding heart social liberals to undermine the fabric of our orderly and sound way of life. It is only through the broad appilcation of fear that we can keep those who know best in positions of power, which is exactly where they should be because they know best. We know they know best because they have told us. They know how to use fear.

One other point that seemed to be constantly made is that any new knowledge is bad. Everything was always better back then. Especially when people were spanked!

The only thing I don't understand is if hitting your child occasionally is good, then how come hitting anyone you please isn't better? It has to be better. So in considering all the arguements that were presented I have detemined a useful set of guidelines anyone can use before hitting someone else:

All things were better back then, and it is obviously spanking that acheived that for us so I think adopting any regressive thinking will in fact benefit all of us in the long term!
Posted by David at 3:29 PM No comments: